Cupping is most recognized for leaving large, circular marks that vary in color from light pink and light brown to deep purple, red and black. Often mistaken for bruising, cups do not damage muscle tissue. The marks are not bruises. In fact, the cupping actually draws to the surface old blood trapped between the tissue layers from old trauma or injury such as internal bruising from past trauma or stagnant blood from chronically tight muscle holding patterns. Once the cups bring the old, stagnant blood to the surface, the trapped blood is now able to re-enter the cardiovascular system and be cleaned and cleared from the body. Marks vary in color depending on age of the stagnant blood, darker marks tending to indicate older stagnation. Marks can last from a few days to a few weeks depending on the client. While a client may at first feel stiffness or heat from the cup marks, as fresh blood has also been brought the the surface to create targeted micro-inflammation for healing the tight muscle tissue, cup marks will not be tender to the touch like a bruise.

Cups work with the psychology of the body to catch and release chronically tight, hypertonic muscle tissue. If you were to put yourself in the mindset of the muscle, deep tissue massage can be felt as an aggressive assault to which the muscles actually tense up and a fight back, becoming more irritated and inflamed. Cupping is the back door approach to easing chronic muscle tension. Once soothing massage strokes have warmed up the fascia, and the intuitive hands have identified areas of tension, a cup is selected whose size and strength will best catch the hyper-contracted muscle tissue. The glass cup will hug and squeeze the muscle tissue, sending a signal through the nervous system that essentially says “Hey, muscles, I’m holding you so YOU don’t have to hold you anymore.” And then PHEW!, the muscle lets go and softens.

While cupping is not always the most soothing feeling, the general consensus is that its less painful and much more effective than deep tissue massage. Often times it’ll feel like you’re being squeezed in all the right spots. Any discomfort, which typically feels like a pinch, dissipates quickly as the muscle being addressed realizes it can release and let go.

What Are The Benefits OF Receiving Cupping? 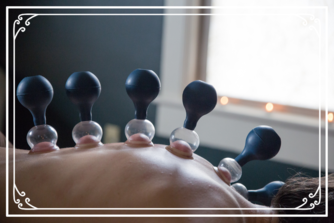 ​​Cupping is a medicine which dates back to 3000 B.C. ancient Egypt. This method of healing then spread through various cultures throughout Asia and Europe. Most recognize it as a mainstay in Chinese medicine. While many forms of cups exist, Camille uses glass cups which when placed on the body, create suction which lifts and separates tightly adhered fascial tissue. Cups are used both gliding across the skin as well as set stationary, producing different desired effects.  Cupping eases the bodies chronically tight muscles, frees  restrictions in movement and increases circulation of blood, lymph and vital life force energy.

What are Those MARKS?

What are the Cups DOING?

Camille has found that much of the chronically tight muscles she ​finds when working with her clients align along Chinese energy meridians. Camille believes that by cupping along these meridians, she can open up clogged energy channels that are stuck due to hypertonic muscles tissue. Once freed by the cups assistance in relaxing these tense muscles, energy can once again flow freely through the energy meridians of the body. Pairing the cupping with Reiki achieves remarkable results as the cups have opened up the energy channels, allowing the Reiki to move more quickly through the energy body and clear stagnation along energy pathways. 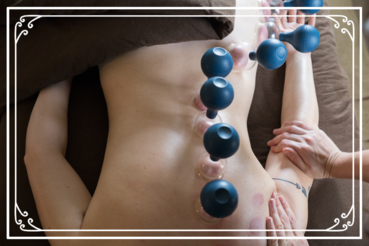